We are (basically) well. Things can't get much worse. Merry Christmas.


Dear Friends, We did not write a Christmas letter this year. We were just too depressed to bring ourselves to doing it. It is now mid April, our mood is much better, things are looking up, and we are finally ready to sit down and face (what is now) last year. I really don't like to complain, but I also don't want to give you, our friends, the impression that life for us is just a bowl of cherries. Also, I want Nadine and I to be able to look back and remember the bad times along with the good, especially after we wake up from the dead ;-). As most of you know by reading our previous letters, for the last few years our lives have more or less revolved around the damage caused by our "sister by choice," Nancy Chaffin. It has been about two years since we took our case against her to the police, and about a year since we met with the Washoe County District Attorney. When they say the wheels of justice turn slowly, they really mean glacially. Nothing was happening, so we wrote a letter to the DA to try to get things moving. About a month later we received a settlement offer which we decided to accept. Finally a few day ago I wrote this letter to Nancy and her family. I feel like that finally closes the chapter.

On a brighter note, there were some good things that happened last year. In May of 2009, Juan Antonio and I were judges for the International Science Fair, that happened to take place in Reno that year. It was a great experience. I realized just how much mathematics I had forgotten, and just how smart kids can be. We are both going to do it again this year, in San Jose. While Juan was visiting, I took him on a tour of Lake Tahoe. We actually wound up visiting the condo Nadine and I used to own in Incline Village, and met the current tenants. It was great seeing our old place again, and it hadn't changed very much. it also turned out that the current occupants were Dan Fylstra and his wife. I had met Dan, and his partner Peter Jennings back in the 70's when they were just bringing out a program called VisiCalc, which would later revolutionize the entire computer industry. Talk about a small world. In September of 2009, Nadine and I came to the realization that our current lifestyle was not sustainable over the long term. Thanks to our Nancy debaucle and the Great Recession, we had to change something. We decided to consolidate. We tried to live in Mazatlan over the summer of 2009, but were pretty miserable in the heat and humidity. We also realized that we just couldn't afford two houses anymore. We took a trip to Ajijic, near Lake Chapala, and thought this could be a place that we can live year round. Even though we thought we had overcome our real estate addiction, we were helpless when faced with the house we found on Via Alta in Chapala. We walked into the living room, took one look at the garden and view of the lake, and were hooked. We moved in in October, after a whirlwind of packing, selling, giving, and moving. We were moving from a combined living space of 1000 square meters into 250 square meters, so a lot of stuff had to go. We kindof snuck out of Mazatlan in the middle of the night (figuratively) since few of our gringo friends were around in early October when we made the move. We apologize to our friends for leaving so abruptly, but we were really just too depressed about everything to contemplate going through a big "goodbye" party. 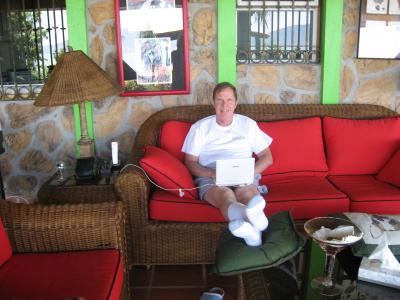 Okay, now for the good news. We really love it here. Even though the house is smaller than we are used to, the patio is larger, we have a wonderful back yard, and our view of lake and the mountains behind it is priceless. The days are warm in the 20' and 30's, and the nights are cool, in the low teens. The dogs love running around in the back yard, and even the cats now enjoy their lives more and spend a lot of time in the back yard hunting grasshoppers. I am writing this right now on my little eee pc while sitting on the sofa on the patio and watching Sparticus, our hummingbird, dip his beak into the hummingbird feeder we put up. We named him Sparticus because he defends that feeder like a gladiator. Woe is any other hummingbird that dares to feast uninvited. Our internet speed here is even better than in Mazatlan, as I now have both DSL and a wireless link, which I can load balance and get twice the upload and download speed. There are more goods and services available locally here, and Guadalajara, Mexico's second largest city, is only 40 minutes away. There are two Costcos in Guadalajara, as well as just about anything you could want in a major city. Our house here runs mostly on solar energy. We generate over a kilowatt in the afternoon, and all of our hot water is heated by the sun. The restaurants here are so good that we have unfortunately put on weight, and as in Mazatlan, the movie theater is never crowded, and is actually cheaper than Mazatlan. (20 pesos for a matinee.) We wake up every morning with the birds singing and the sun shining. We are glad we stuck to our strategy .... get lucky. 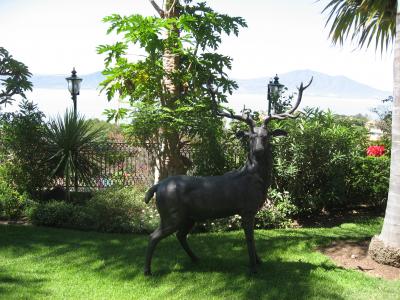 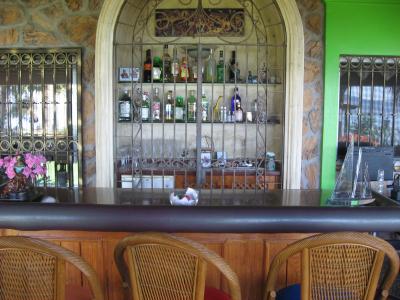 Quote of the day:
The reason there are so few female politicians is that it is too much trouble to put makeup on two faces.
Maureen Murphy