We are well. We wish this year had never happened. Merry Christmas.

Wow! What a year! The main reason I'm writing this letter is so that five years from now (I hope) we can look back and say that we sure are glad that "This year isn't like 2008." 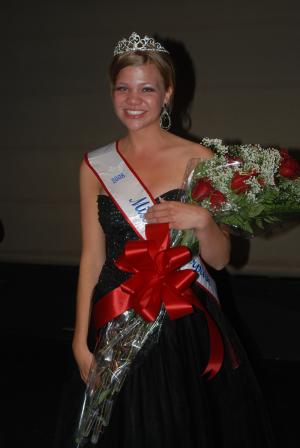 If you look back at the letter we wrote last year, you will find that we were both very happy to have met Nancy Chaffin, whom we called "our sister by choice." We both felt that we were terribly lucky to have found such a dear friend and kindred spirit so late in our lives. Well, it was all an illusion. Nancy was lying and deceiving us on a daily basis, and in the end wound up breaking our hearts. We loved her like a sister, but apparently to her we were only a "mark."

Okay, just one more dark paragraph, and then I'll move on. This year apparently has been dubbed, "steal from the Laxen's year." In addition to Nancy's contribution towards making us sadder and wiser, it turns out our housekeeper (in Reno) was helping herself to the contents of my wallet on a weekly basis, while she was our house. I caught her by photographing the two one-hundred dollar bills that were in my wallet just before she arrived, and then confronting her with the empty wallet and the photographs while she was still there. What is again really sad is that we really liked her, and were in the process of "fixing her teeth" when this happened. Okay, that's enough whining for now.

On a much more positive note, it looks like we have finally gotten to the bottom of Nadine's re-occurring throat infections. It seems that the root of the problem is post-nasal drip. The doctor told her to rinse out her sinuses on a daily basis, and ever since then her throat infections have disappeared. Happy days! The other good medical news is that for years Nadine has suffered with a heel spur, that at times made walking very painful for her. It first flared up back when we were living in Belvedere, and we went for a walk around Angel Island, and has been giving her trouble ever since. Well, just before we left for Reno this summer, Nadine had a small foot surgery here in Mazatlan, and her heel is pain free for first time in many years as I write this. She is looking forward to being able to increase her activity level in 2009, and so am I!

I can still remember back in 1991, just after Nadine and I were married, we were visited by Nadine's sister Cindy, and her family. Cindy's family included the newly born Samantha, who just wouldn't stop crying. The crying got to be so intense, that we decided to take her Marin General Hospital. It was there that I walked down the hall with her in my arms, "shaking and jiggling." That seemed to be the only thing that calmed her down. Well, this year she was crowned "Miss Moorpark." Boy, there's just nothing like that to make you feel like an old fart. 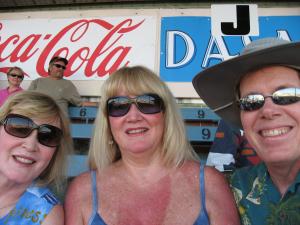 This year also brought us back to our cowboy roots. This photo was taken during the Reno Rodeo, when sister Cindy paid us a visit. Fortunately I brought my ipod along, so I went for a stroll listening to Quirks and Quarks while the girls and brother Ross hunkered down fo some good ol time cowboy funin. Yeah buddy. 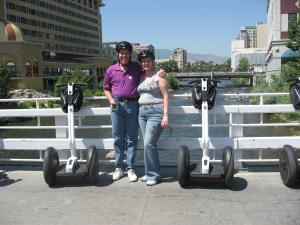 We had our house (and wallet) cleaned every Monday during the summer, so it behooved us to get out of the house and skip the vacuum cleaner symphony. One Monday I decided to take Nadine on a new adventure. I signed us up for a segway tour of downtown Reno. After about a half hour of practicing indoors we zipped around downtown Reno on our segways at around twenty miles per hour. It was great fun, and we covered a lot of ground. If you ever get an opportunity to try it, we both recommend the experience. 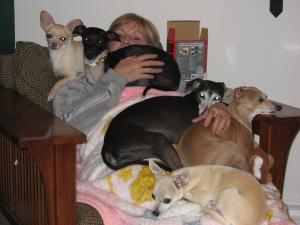 Most of what we did this year, though, involved finding a safe and comfortable place for our animals to hang out. Here we find Nadine, always ready to sacrifice herself for the sake of others, providing just such a spot. To me, it looks like she has just enough room left for two more Chihuahuas, don't you think? 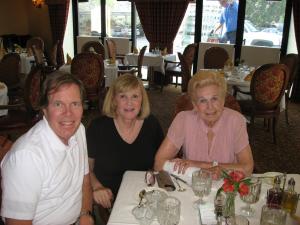 Another visitor this summer was Nadine's mother, Mary. We were exploring the possibility of having her move into an assisted living home in Reno, so we accompanied her to the place and enjoyed her company during a delicious lunch in their spacious dining room. Mary decided not to move, but Nadine and I are looking forward to having someone else doing the cooking and cleaning as soon we are eligible. It's nice to have something to look forward to as you get older, besides the experience of watching TV shows you've seen before, only to remember five minutes before they are over that you have already seen them. 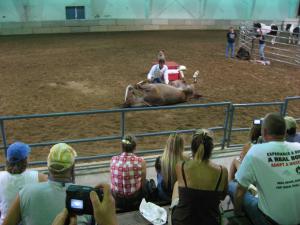 The best thing that happened to us this year is that Nadine finally had the opportunity to reconnect with her brother, whom she hadn't really had in her life since the year we got married in 1991. This summer she convinced him to move to Reno and start a new life. He stayed with us for a couple of months before we went back to Mexico for the winter. During his stay, he had the chance to go to the mustang horse expo, held every year in Reno. Ross is a cowboy at heart, and the only way he could be happier living in Reno is if we let him spread horse manure over our floors. I took this photo during the mustang expo. Apparently Nevada has not yet made it illegal to perform certain acts in public, though I'm sure if the horse were a woman, that guy would be promptly arrested. 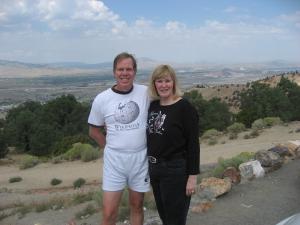 Our big trip this year consisted of driving for an hour and hanging out in Virginia City for a couple of days. Actually, we had a really nice time, and stayed in a charming bed and breakfast. We ate the ribs, rode the train, looked at the old abandoned silver mines (nothing more than a hole in the ground), and generally had a good, relaxing time. 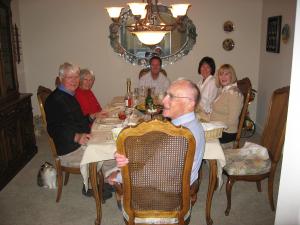 Finally just before heading back to Mazatlan, our friends Al and Debbie Jackins invited us over for a delicious dinner. One of the best things about Reno is the friends that we've made there. We made it a priority to get together with our next door neighbors, Mike and Barbara, once a week so that Mike and I could teach the girls how to be gracious losers during "game night." We also attended their Christmas dinner 2007 and their annual Summer Hummer. We are truly blessed to have such good friends.
Quote of the day:
My dog is half pit bull, half poodle. It's not much of a watchdog, but it's a vicious gossip.
Craig Shoemaker