We are well. We stayed home (mostly). Merry Christmas.

A warm Christmas greeting to you, dear reader. The end of 2005 finds the Laxen family still healthy, enjoying the balmy Mazatlan winter, and wondering why time continues to accelerate through our lives. That is not how the year began however! 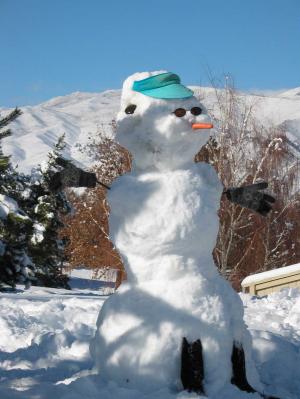 For some unknown reason, we decided to spend Nadine's 51st birthday in our Reno home this year. So, forgetting that we don't do winters, we packed up and made our way north on January 15th. Little did we realize that Reno had just experienced its worst winter storm since 1920. The snow was still six feet high in some places, and poor Henry had to shovel a path to the BBQ so Nadine could cook her delicious steak dinner. During that endeavor, Nadine neglected to keep her sliding glass door in her bedroom closed, and in his enthusiasm, and lack of co-ordination, Henry managed to toss a shovel full of snow into the middle of her bed. Happy Birthday Sweetie!

Fortunately, our friends Curt and Mike were kind enough to shovel the snow off of our walkway and driveway, so we could get into the house when we arrived around midnight. Muchas Gracias amigos! We almost would up staying a lot longer than we expected too, for it turns out our flight was the only one of the day that departed the Reno airport the morning we left. This year we will visit Nadine's family in southern California for her (and Cindy's) birthday. 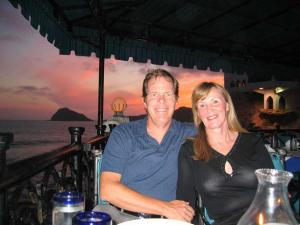 Our winter in Mazatlan was pretty quiet this year. Nadine's mom (Mary) came down for a visit in April, and we used the occasion to go to the Sheik, one of our favorite restaurants here in Mazatlan. 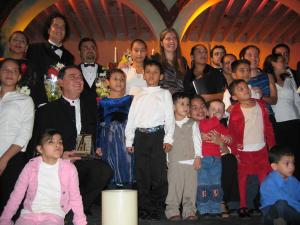 One event that we attended while Mary was here was a wonderful concert put on by the local Orphanage. They sang the complete Carmina Birana, and did one of the most beautiful versions

What is this OGG stuff?

OGG files are a free alternative to MP3 files. If you do not already have it you can download a player from http://www.vorbis.com This recording may sound a little fuzzy because I downsampled it in order to reduce the file size.

of thatstory that we have ever heard. 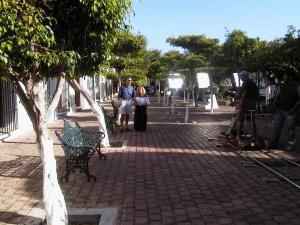 We also discovered that we had some friends that were movie stars this year! Our friends, Jack and Valerie Moreau, were asked to star in a promotional video of Mazatlan produced this year. Here they are, casually strolling down the sidewalk near the Plazuelo Machado, in downtown Mazatlan, accompanied by perfect lighting and a movie camera on tracks. 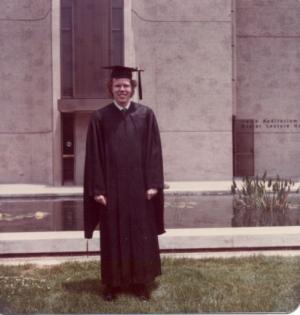 We left Mazatlan early this year, in mid May, in order to make it back to the USA for Henry's 30th college reunion. My God, has it been that long? At the re-union dinner, Henry found himself surrounded by a bunch of old people. Who were these guys? Maybe I somehow wound up in the wrong room. I did recognize Richard Gruner, who looked pretty much the same, so I guess I was in the right room, I just didn't know any of these people. Well, after dinner we went around the room to introduce ourselves, and I discovered to my shock and horror that I actually knew almost all of these people. The ones who didn't have grey hair had no hair, and the divergence of the waistline was definitely an increasing function of time. Of course, after checking out my graduation photo, I realized that I hadn't changed at all. 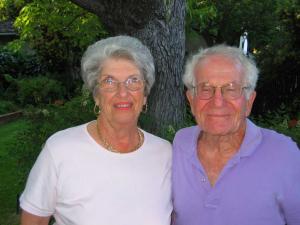 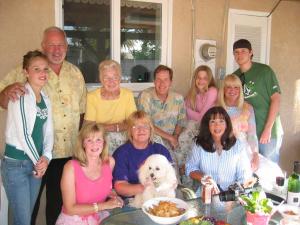 While we were in southern California, we were invited to stay with our friends, Bob and Carol Marver in their lovely home in San Marino. Also, Nadine's mom put on a family reunion event, which was held in her back yard. 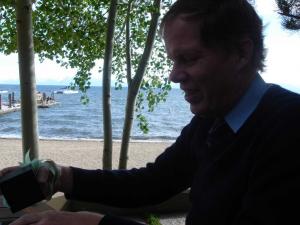 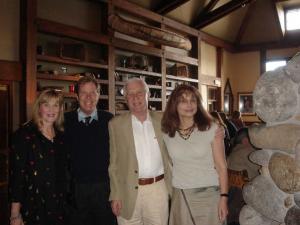 Once we got back to Reno, it was time to get depressed, I mean celebrate, Henry's 51st birthday. We decided to escape to Lake Tahoe, and spent Henry's birthday with his friends, Alex and Anna Lushtak. We had a nice dinner at the Eagle's nest, on the lake there, and spent the night in the Cal Neva. 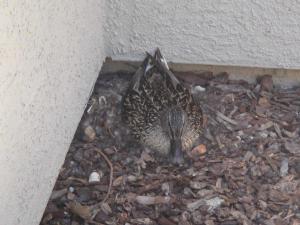 As we get older, we take comfort in the continuity of things. Remember when staying home on a Friday or Saturday night was almost unthinkable? Now, staying up past 10pm is almost unthinkable. It was thus that we welcomed the reappearance of our duck, who decided to use our tiny front yard as her nesting site, for the second year in a row. She would just sit there, for hours at a time, immovable, pretending she was invisible. There were far fewer ducks and geese in Caughlin Ranch this year, but we are pretty sure our duck had a successful season and was the proud mother of three little ducklings. 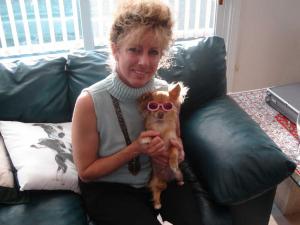 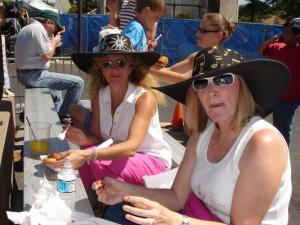 There's is always something to do in Reno during the summer. This year we went to the BBQ Rib cookoff with our friend Karen Gates. We also became godparents to her new baby, Mylae. It sure looks like Nadine is enjoying those ribs. 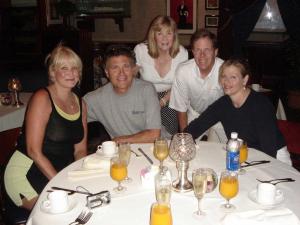 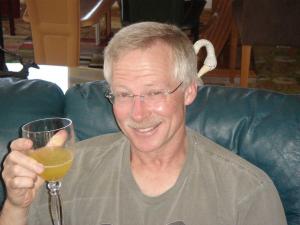 We had a few visitors this summer too. Nadine's sister, Cindy came up for a visit with her boyfriend Ron, and my junior high school best friend, Bob, came up for a long weekend of non gambling and tennis. 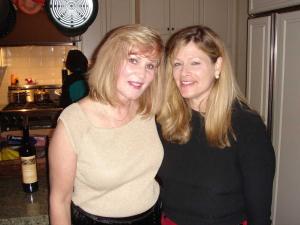 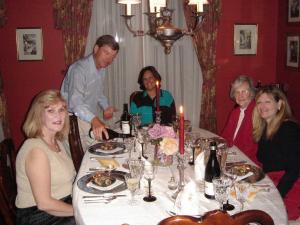 Another special event that took place this summer was Nancy and Barbara's duck dinner. Our friend Nancy had bought all of the fixins for a duck dinner, a la Maxim's in Paris. Complete with an escargot appetizer, which to Nadine's complete surprise, she actually enjoyed. One of the best things about this summer is that our friend Nancy was feeling well during most of it, and we enjoyed spending more time with her and her (dog) son, Orly. 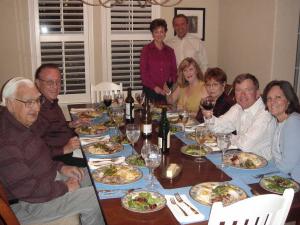 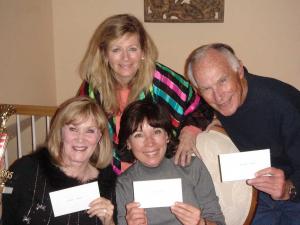 During the summer, Nadine and I hosted several Potluck Everybody Wins Texas Holdem games at our house. Our new neighbors, Rich and Bobbi Bennett returned the favor by hosting a grand feast for the entire neighborhood. Also our other neighbors and friends, Frankye and Howard Craig, put on their own poker tournament. The four big winners, Nadine, Debbie, Al, and Nancy are pictured here, holding their million dollar checks. 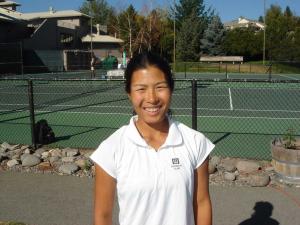 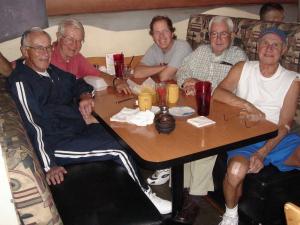 Henry treated himself to weekly tennis lessons this summer, and really enjoyed playing with Dione, his 98 pound tennis dynamo. It just proves again, that size doesn't matter. He also got to play with his tennis buddies three times a week, and was treated to a going away lunch at the Hacienda, when it was time to return to Mazatlan. 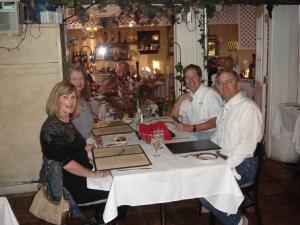 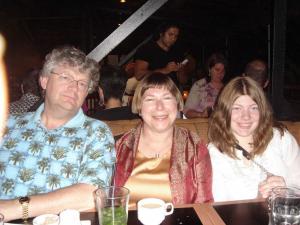 This summer included what seems to be becoming our annual pilgrimage to Marin, and other destinations California. While there, we were able to visit with our friends, Alex and Anna, Bob and Debra, and pictured here, Steve and Jane Colley, Eric and Marni Welsh, and Jerry and Tina Yesson. These trips always involve lots of eating, and little exercise, so I'll tell you about the new diet I came up with to shed some of those excess kilos below. 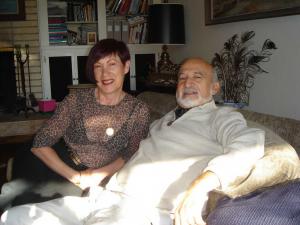 It seems like everybody and their brother in writing diet books these days, so I decided to get in on the act. The title is: The eat anything you want and only consume half the calories diet. Using this diet, I managed to lose about 12 pounds at the end of the summer. The problem with this book is that the title is longer than the contents, which consists of the sentence: Eat every other day. 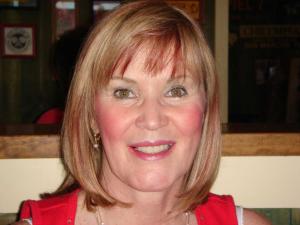 Well, summer is winding down, and it is time for Nadine to start changing things. A word of advice to husbands and boyfriends out there everywhere. If you wife walks in and asks if you have noticed anything different, it is already too late. If, at that point, you fail to come up the thing she is referring to, your troubles have doubled. If, at that point, you pick something that has changed, but is not what she is thinking about, the hole you are digging has deepened considerably. But never, and I mean never, should you say that you haven't noticed anything different about her, for that is the surest path to a week of beets and broccoli that you can make for yourself. Fortunately, being the ever attentive husband that I am, I noticed right away when Nadine came back with red streaks in her hair. In fact, I even liked them. 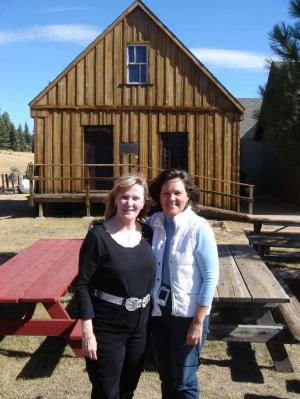 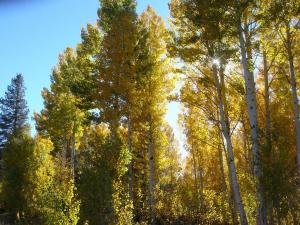 A few years ago, we spent a month in Vermont, in order to see the fall colors, and give it a try to see if we would like to be summer residents there. This year, our friends, Mike and Barbara Heffner, offered to take us on a fall colors tour of the Lake Tahoe area. We agreed with enthusiasm. They took us to a place callen Sorensen, where we stayed in quaint little cabins that used to be part of Santa's village near Santa Cruz. Along the way, we stopped to watch the salmon run up the Truckee river to their spawning grounds further upstream. 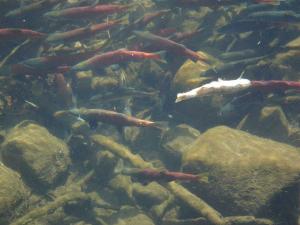 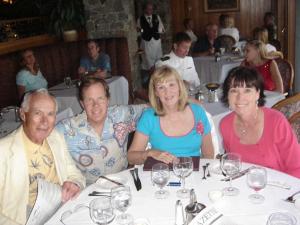 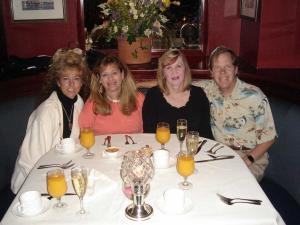 Great friends made for a great summer. Reno wouldn't be the same without Al and Debbie Jackins, Karen Gates and Nancy Chaffin, and our next door neighbors and best friends, Mike and Barbara Heffner. We hope all of you find the time to visit us down here in Mazatlan, as soon as possible. 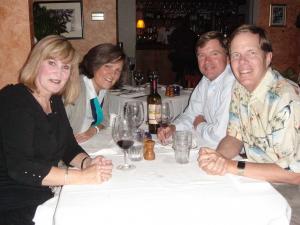 When we got back to Mazatlan this winter, we did what we always do, namely get all of our routine medical checkups out of the way. Here, if we want to make a doctors appointment, instead of waiting for six to eight weeks to get in, we are usually seen later that day, or perhaps the next day. In fact we usually walk the triangle, from our doctor, who orders the tests, to our health insurance company, which pre-approves the tests, to the hospital, which performs the tests. All in all it takes perhaps an hour or two. This year, Nadine got a nasty surprise, her triglycerides were double normal. She resolved that in addition to attending water aerobics each day, she would also walk to and from her water aerobics class, an additional seven thousand steps round trip. Henry thought it was a great idea, and also started walking back and forth to tennis each morning. Also, Nadine bought an electric wok, and started cooking more stir fry vegetables and rice. The net result is that we are both feeling great, sleeping better, and Nadine's triglycerides have returned to normal. Life is good.

Well, I've let this sit for a few days, to see if I could come up with a powerful and pithy ending, but I can't. So, in closing, let me say this

Quote of the day:
A dog teaches a boy fidelity, perseverance, and to turn around three times before lying down.
Robert Benchley