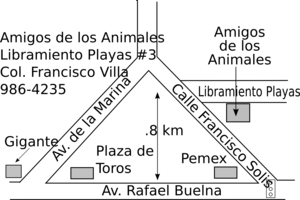 Amigos de los Animales is the Humane Society of Mazatlan. Nadine and I were amoung the people who started this organization, but we have since taken a less active role. To reach the shelter, call 986-4235 and ask for Edgar or Juan Jaime. Both speak English, and will be happy to be of service. A website dedicated to the Amigos de los Animales is now available.

Hands Across the Borders [top] 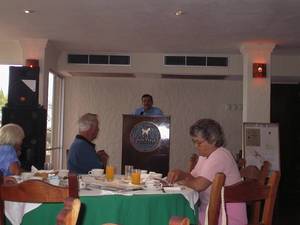 Hands Across the Borders meets the 2nd Friday of every month at 9:00am at the Inn at Mazatlan. There is always a guest speaker who has something interesting to say. The doors open at 8:30, and breakfast is served for around 5 dollars. The breakfast is bacon, scrambled eggs, and hash browns, and is always quite tasty. No reservations are necessary, so just show up. They also sponser an annual dinner and silent auction. Each year many businesses and individuals make generous donations which are auctioned off during the dinner. This is really a great event, and if you are in town you should make it a point to get tickets and attend. Whatever monies are collected from the monthly meetings and the annual dinner are given away to various needy causes around the city. There isn't really one specific target charity.

Every year the December meeting features the local Salvation Army Orphans, who work all year long to put on a great program of singing and dancing. In 2005, I took some photos of the kids, so you can see what you are missing.

Friends of Mexico [top]
Friends of Mexico is an organization serving the needs of part and full time international residents of Mazatlan. The general meetings are held on the second Tues. of the month, 9:30 at El Pueblito Restaurant, just across the street from the El Quijote Hotel. Here members gather for refreshments, to be brought up to date on the organizations activities, and obtain useful information concerning life in Maz. presented by a series of Guest Speakers. Gatherings for socializing, games, cards, etc. is every other Tuesday afternoon. Cooking and Spanish classes have been available in the past. Those and other continuing ed. courses are offered. The organization provides a Directory of Services available to members, including a special rate for hospital care. Fund raising through donations, bingo, seminars, classes parties, raffles, etc. is for the benefit of the young, less fortunate of Mazatlan. For example, Friends of Mexico recently provided 64 elementary school children with uniforms that they would not otherwise be available to them. They have also provided the fee for bus fare to the Art school for talented students that could not afford transportation to classes. A continuing program for assisting school children is in operation. Trust and Endowments can also be set up through the Friends of Mexico organization. New members are welcome For more information contact Jacque Demmer.

Pro Mexico [top]
Pro Mexico is a private, no profit, volunteer organization that focuses on Health and Education programs for the needy. They sponser several events each year, including the the annual house tour. They also hold a Christmas Bazaar every year, which includes a brunch. This year (2004) it will be held on November 9th, at the El Cid Hotel in the Salon de los Tapices. This is a pretty big deal, so if you're free on the 26th, we're sure you would enjoy the event. Last year there were around 600 attendees, and the same or more are expected this year. Nadine and I try to go every year, it's a great place to do a little Christmas shopping.
Familia [top]
Familia was founded in 1999 ago by some Mexican women and a few Americans. It's purpose is to help a very poor area called Genero Estrada,which is about half way to the air port. Originally it probably was started by squatters. Some of the people own their houses and the land it is sitting on. Many rent the land and the house. For quite a few of them the term house means tar paper shacks and dirt floors. Many have no stove, no refrigeration, and no running water. If they have electricity it is provided by a single lamp cord. They, for the most part, fall between the cracks. They are not eligible for Social Security because they, or their employers, have never paid into it.

At first glance the obvious need seems to be housing. That was our first intention. It finally dawned on us that we did't have the resources to handle the housing. The answer was to build a community center that would benefit the whole area. That is what we have been doing for the last five years. We have constructed a cement building 45 feet by 60 feet. About a third of it has a lower area that is divided into three rooms and a bath room. We also have a bare bones kitchen and feed about 50 kids a day.

We feel it is a huge success. The women and children of the area love it. It has brought the community together. The government is so impressed that they vacated some roads and have given us title to about 5 acres of land which we have developed into an all purpose park and sports field. We have a dentist that comes once a week and a doctor that comes three times a week. We need dental equipment but the money has been raised and a local dentist is assisting us in finding used equipment.

Our goals are constantly changing. The building phase is largely completed. Our emphasis now is on programs. Scholarships for the kids, special schooling for some of the kids with special needs. Self esteem seminars for the women. English classes, sewing classes, cooking classes, make up classes. We expect our first graduate from refrigeration this month.(March 2000) We are going to experiment with a sports night for the men. We intend to open the center one night where the men can watch some sport event on the large screen TV that will soon be in place. Our short term goal has been met. We have established community and hope. Before we came two young children died needlessly. They had been bitten by a scorpion and the mothers didn't have the few pesos needed to get them to the hospital. I don't think that would happen today. Our long range goal is to see the standard of living raised sufficiently where the people of Genero Estrada can take over the management and responsibility of that center themselves. We are a number of years away from that.

Anyone interested in seeing the center for themselves can contact either Kay or Irv Carr at 011-52-669-913-0037. If you would like to help, Familia is a charity approved by the Mexican Govt. For US citizens you can make checks out to Mazatlan Charity - an IRS approved non profit organization in the USA.

Friends of the Aquarium [top]
The Friends of the Aquarium is an organization dedicated to helping distressed animals that are not your common household pets. They often go out and rescue injured pelicans and other wildlife in need of assitance. On one occasion, they had to hand feed hundreds of baby parrots that they recovered from a bunch of wildlife smugglers. This group has some true heros. For more information contact Martha Armenta
AA Meetings [top] 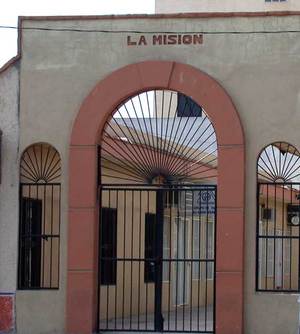 AA Meetings are held every day. On Monday thru Saturday they are at 6:30PM, and are on Sunday mornings at 10AM. There is a women's only meeting Tuesday morning at 11AM, and a Men only meeting Tuesday night at 6:30PM. Saturday's meeting features a speaker. The last meeting of the month is the groups birthday meeting, and the business meeting is the first Wednesday of the month. The meetings are held at Avenida Camarón Sábalo (the main drag) #306-7. It is across the street from VIPs restaurant and Baskin Robbins in the golden zone, between the paint store and the Sal Si Puedes Bar. You can call Trent at 985-5722 or 044-669-106-4218 for more information. They also have a www site.
Alanon Meetings [top]
Alanon Meetings are held on Wednesday from 5-6pm at the same place as the AA meetings above.
American Legion Post 11 [top]
American Legion Post 11 meetings are held at the El Paraje restaurant on Camarónn Sábalo at 1pm. Here is their schedule:
The Vineyard [top] 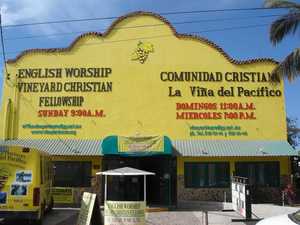 The Vineyard is a Christian Church in Mazatlan that provides a multitude of support and outreach activities to twelve very poor Colonias/Fraccionamientos in the area. Over the last several years both the English and Spanish congregations have constructed community centers, provided much needed medical and dental services, operated shoe purchase and distribution programs to over 2500 children, operated feeding programs as well as teaching programs in Bible Study, English and tutorials for school. Please call to reserve a tour. You are most welcome to participate in the church services or the ministry. The church and office are located at: Avenue Camarón Sábalo, #333-32 Altos, Centro Comercial, Las Palmas, Mazatlan, Sinaloa, Mexico. The telephone number is 916-5114 locally and Vonage 210-587-7342. Email address: vineyardmzt@yahoo.com as well as a website: www.vineyardmcm.org
Downtown Historical Project [top]
The Downtown Historical Project seeks to revitalize the area known as Old Mazatlan by following the model of the The Main Street Institute. They have been involved in grafitti removal, designating certain buildings as historical, helping homeowners and downtown businesses upgrade and maintain their buildings, and the general beautification of the downtown area. Here is their official blurb:

Mazatlan is a port located on the Mexican Riviera in Northwest Mexico. It has around 500,000 inhabitants and its economy is based principally on tourism and fishing. Its origins date from May 14, 1531, but it was not until June 2, 1837, that Mazatlan became a municipality.

Urban development has divided Mazatlan into two distinct areas. In the north, there is the Golden Zone with its great hotels and beaches, night clubs and shops; in the south there is Old Mazatlan, rich in culture, architecture and memories.

About 10 years ago a group of locals started a movement to improve and give life back to Old Mazatlan. There have been noticeable improvements, but there's still a lot to do. In March of 2001, some 480 buildings in Old Mazatlan were declared Patrimonio Cultural de la Nacion (the equivalent of National Historic Landmarks) by President Vicente Fox. Considering this, and in light of the deterioration of Old Mazatlan, we believe in the necessity of preserving our character and identity, and returning Old Mazatlan to its 19th-century splendor when it was full of commerce, culture and vitality.

That is why Proyecto Centro Histórico, A.C. was created: to revitalize Old Mazatlan. The PCH is comprised of a multidisciplinary group of citizens and organizations that have joined forces to improve the conditions for development by enhancing the identity and heritage of Old MazatlÃ¡n. To do so, we are using four principles: organization, promotion, design and economic restructuring. In the near future we would like to see Old Mazatlan become a small community of residents and business owners, nationals and foreigners, who appreciate the unique style and atmosphere that the center of town has to offer: recreation, culture, tradition and a superior quality of life.

The methodology we are using in our organization comes from the Main Street Institute, which has achieved the revitalization of 400 downtowns in the United States and Canada, and has some 1,400 affiliates.

We believe that the best way to achieve a goal is to unify forces. We invite you to get involved with the Proyecto Centro Historico so that you can feel proud to live in, work in or visit Old Mazatlan. Through our joint efforts, our heritage will be passed on to new generations.