So now that you know what an MRI machine looks like, and how it works, the next question is what can it do. Well here are some interesting pictures of the inside of your body, complete with the report that accompanies them. This is what you can expect to receive after a visit to Enrique's laboratory. 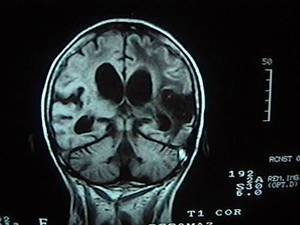 This patient had a sudden loss of her motor functions (she wasnt able to move her right arms and legs) 2 months before the study. She went thru a slow recovery with lot physical therapy and drugs. She was recovering some of her movements but suddenly all the improvement stop. We performed an MRI that showed the changes expected for a lesion of that time (2 months old) but also showed and increase in the size of the ventricular system( where the Cerebrospinal fluid or CSF flows) that was causing hydrocephalus. Due to this finding, the patient went thru another surgery and had a shunt valve installed, the last word we had from one of her relatives is that she is again on recovery.

The official report included this: T 1 coronal SE (spin echo) sequence that shows an area of infarction in the left parietal lobe. Also enlargement of the ventricular system is observed. 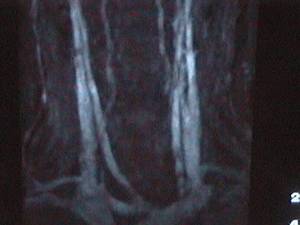 This patient had syncopes every other day...he is a 50 year old male without any important background...MRA (Magnetic Resonance Angiography) was performed due to the fact that he has a short neck and because of that was a bad candidate to check the entire carotid and vertebral arteries. So, MRA was chosen. it turn out to have a normal appearance. A Holter (24 hours monitoring of the heart rythm) disclosed the cause...an unusual arrytmia was the reason of the sudden loss of blood supply to the brain.

The official report included this: GE (gradient echo) refocused sequence that shows normal blood flow from the carotid and vertebral arteries. MRA (Magnetic Resonance Angiography) DOES NOT USE CONTRAST INJECTION to obtain this images since the flow of blood (with its water component) gives enough signal to display the vessels. Is an extraordinary and non-invasive method to evaluate medium and big vessels of the body. 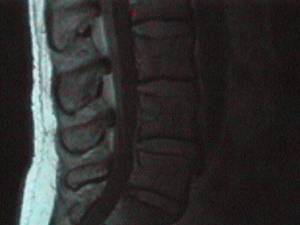 A 39 year old male came due to lower back pain after moving stuff from his home to a depot. MRI shows a bulging disk, that means that there is no herniation of the diskal content. This is very important since the managment does not require surgery. Only an MRI can tell with such accuracy the status of the disks, vertebral bodies, ligaments and nerve roots. 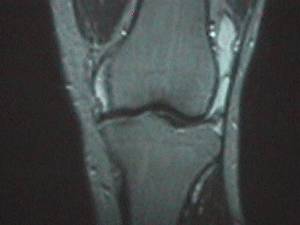 A 30 year old male that after a soccer game came with swelling of the knee. A meniscal tear was suspected. The MRI confirmed the lesion and also showed important swelling within the knee. The appearance of any structure is easily disclosed in MRI. Here you can actually see the bones, ligaments, soft tissues and the fluid collections that appears bright and at surrounds the knee.

The official report included this: T2 coronal Se (spin echo) sequence of the knee. The bright (white) rounded images that surround the knee is fluid related to synovitis or inflamation of the bursaes of the knee in a patient with a sport-related injury.

Quote of the day:
He grounds the warship he walks on.
John Bracken on Captain Barney Kelly, who ran the USS Enterprise into the mud of San Francisco Bay in May of 1983

Sitemap
Go up to Resomaz, Mazatlan's Imaging Center Go up to Some Local Businesses you might Consider Go up to What Others Say Go up to General Information on Mazatlan Go up to Home Page of Nadine Loves Henry
Go back to A Tour of Resomaz -2- Continue with Special Deals for Tourists