The most dangerous man in Mazatlan 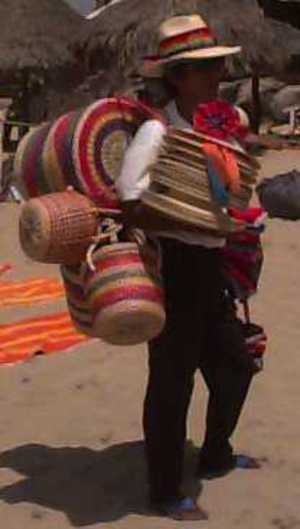 Yes, the greatest danger of the beaches of Mazatlan stands before you. Appealing to most women, he makes husbands shudder. There is nowhere on the beach that is safe. You could be relaxing under a palapa, only to be suddenly and viciously attacked with the phrase, "Would you like to buy a hat?" or "Let's make a deal!" The only danger that is more extreme is not found on the beaches, but on the streets. It is called, the Timeshare Salesman. You have been warned.
Quote of the day:
My dog is worried about the economy because Alpo is up to $3.00 a can. That's almost $21.00 in dog money.
Joe Weinstein

Sitemap
Go up to Stuff I didn't know where else to put Go up to General Information on Mazatlan Go up to Home Page of Nadine Loves Henry
Go back to The Mazatlan Foreign Residents Phone Directory Continue with Don't go to Sr. Frogs Without This